Join the War on Expensive Drugs

Posted by CANNASaver on Saturday, 04 December 2021 in Canna Blog

Ok so maybe it's a bit dramatic. But it's true. And it's what CANNAPAGES has been about since our inception 2009 -- saving money on marijuana by sharing dispensary weed deals with the (cannabis) world. None of us are old enough to have voted for Ronald Reagan, but if we had, we would have been pretty pissed at ourselves.

So how do you "Join the War on Expensive Drugs" then, you might ask? To respond, we'd say directly "it's easy as shit". All you have to do is use this website. That's it. Telling your friends about it wouldnt hurt, unless you're that dude with every kind of marijuana strain, wax concentrate, and edible to try under the sun who wants to keep his sources a secret. In that case, you'd also be kind of a dick. But do as you will! We don't judge.

Just to be brutally honest, the goal of this article is so that if you're in Denver at some point over the next few months, and you saw our billboard, and you would google'd "Join the War on Expensive Drugs" you would see something besides semi-lame bootstrapped YouTube docs (you're welcome) about the actual war on drugs. And yes we lumped all concentrates into "wax concentrates" in the last paragraph so we could link to that page -- and typed about it here again so we could link to it again. We also know there are more types of concentrates than wax, but that's not what the majority of you are searching for. Sorry. (We're really not.)

Here's one of our "Join the War on Expensive Drugs" billboards in Denver: 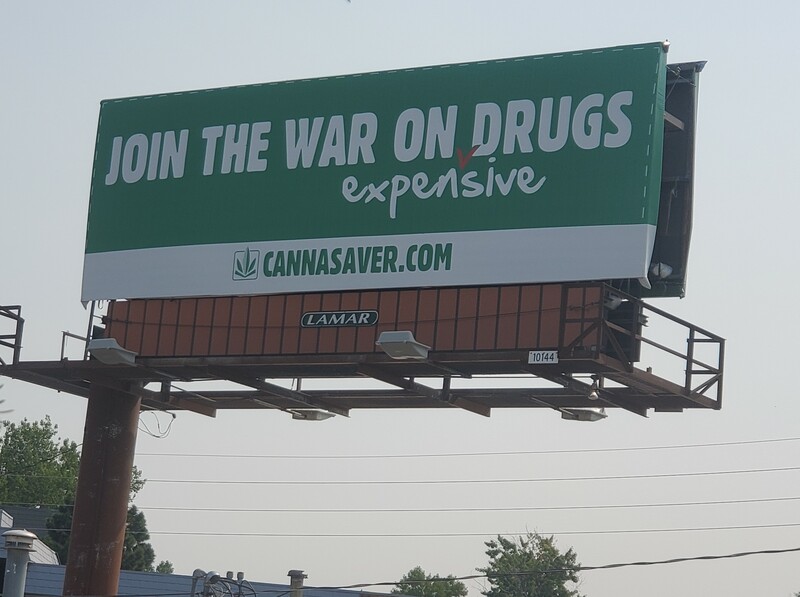