Posted by CANNASaver on Thursday, 02 December 2021 in Wacky Racky

Lookah really has cornered the market on smoking for dummies. If you want to dab, they have their Seahorse Pro for dummies. Now they've added a dry herb vaporizer called Ice Cream.

First off, let me tell you, this dummy is apparently blue-purple color blind. Factory preset is Half Baked when I thought it was set to Lightly Toasted. It only took me 10 test sessions to figure out why my eyeballs kept escaping their sockets. Or why my nose and lips had temporarily vacated my face. 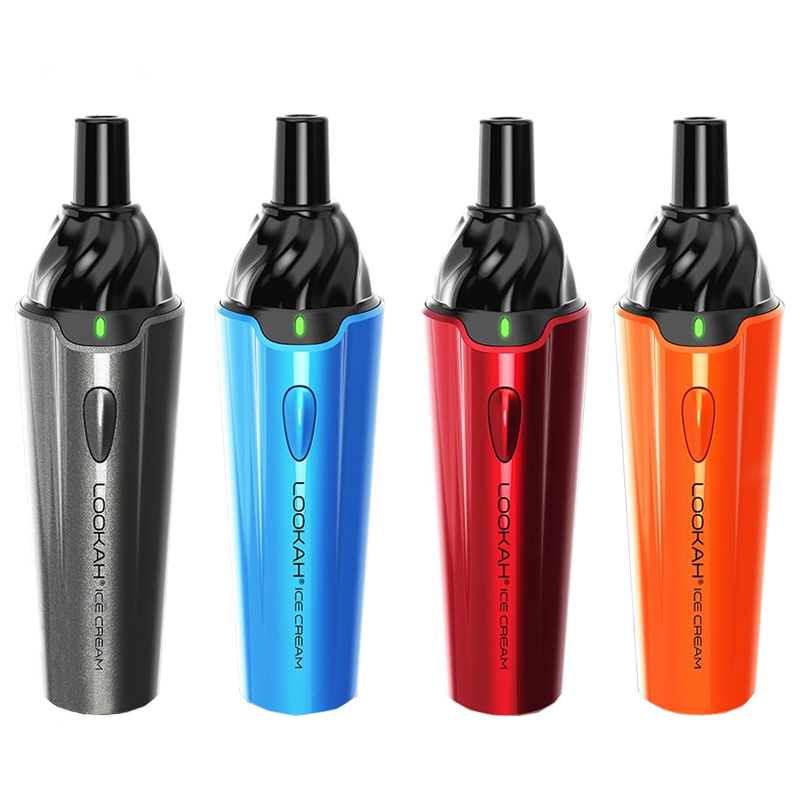 I gave the Ice Cream to my two toughest vaporizer critics to test. Both Hubby and Thing 1 weren’t quite as riveted. "This still isn't the same as smoking a pipe," they both said.

Here I was, sitting completely blasted, and these two were acting like pipe snobs. If I hadn't been locked to the couch I probably would've bonked them in the heads with my rubber chicken. So I shot them with laser eyes instead and just shook my head.

Once my brain processed a retort I piped up and challenged, "Next time let me crank the heat up to Fully Baked, this is just Lightly Toaaassted. Oh shit, no it's not! No wonder my face has been misplaced, this was Half Baked!"

So for their next session I set it to Fully Baked (white light) and handed it over. Needless to say Thing 1 doesn't want to give my Ice Cream back now. To him it hit just like his pipe without as many coughing fits. He is in love!

Even old-school hubby said, "That's the closest I've seen a vaporizer get to a pipe." And while that may not seem like a glowing recommendation, it truly is, coming from that old man.

In a Nutshell:
I have mixed feelings about this vaporizer. I love the overall use. Fill it, turn it on, select temp. When it vibrates, start hitting it until it vibrates to turn off. No holding down any buttons or trying to figure out when to start hitting it.

Loading is a little clumsy and it's hard to tell how full it is. Just use a rolling tray to catch any spillage as you fill the oven. Or use an old medicine bottle to dump herb in. I prefer the medicine bottle versus the pinch method.

I was impressed by how quickly this vaporizer reached its set temp. This unit also stays a lot cooler than most I have tested. Even after a few back-to-back sessions with the family.

Changing temperatures is super easy too. Just click the power button once. Click again to go up one more. I start my session on green to get all the wonderful tasting terps. Then after about 90 seconds I change it to purple for that half baked pain relief setting. No complications whatsoever.

My concern is over the cleaning. There is no way to get into the chamber to really clean it between uses or to give it a really good one every other day. So I worry about tar build-up over time clogging up the oven. Personally I clean the oven with an alcohol Q-tip every evening or as needed.

The mouthpiece also has a screen under the plug cap. This screen is removable, while the one on the oven is not.

The mouthpiece screen is probably where most of the tar will land, and thankfully, it’s super easy to clean. I just wish Lookah would've included some replacement screens in the box. Make sure to clean the plug, screen and mouthpiece often (daily or every-other-day depending on how often you use it). It will otherwise clog with tar and some herb that escapes the oven chamber.

The battery doesn't last long. I am sure the number of sessions one can get on a charge also depends on what heat setting you choose. On the highest (White - Fully Baked) it is 3 full sessions. Charge time is 2-2.5 hours. This is not a terrible performance if using solo.

You need to remember this isn't a Pax or DaVinci IQ2--and it costs a fraction of the price. Comparably, battery life on the DaVinci is phenomenal for instance, and its many features like  easy dosing and sleek app constitute the higher value.

However, at just $80, the Lookah Ice Cream won't break the bank like those more advanced units. This is a sure-fire roast perfect for anyone whether new to medical or recreational cannabis or a seasoned veteran.

Drawbacks were otherwise insignificant. I was hoping the name Ice Cream meant the vape would somehow be cooler than normal but it really wasn't. Overall the unit was cooler (even the mouthpiece) than most others, and that's a huge plus. The manual also suggests the light will turn from red to green when fully charged. My light turns blue. No, not blue-green color-blind either. When you cycle the temperatures note how green the green light is. Nope, my fully charged light is blue.

What I did find wonderfully surprising about this vaporizer was the taste. Comparing terp taste between the DaVinci and Ice Cream, hands down, Ice Cream is the winner here.

Due to price and ease of use I still give this unit 5 out of 5 stars. It doesn't make the wow list or get the Wacky Racky seal of approval, but it gets pretty darn close.