Posted by CANNASaver on Saturday, 28 August 2021 in Canna Blog

We sure love our marijuana concentrates. Cannabis concentrates are a huge staple in the marijuana industry. With marijuana consumption increasing around the country, more people are either aware of “dabbing/dabs” or are currently hitting one.

Marijuana concentrates are made using a variety of marijuana extraction methods.

Solvents such as butane, CO2, and propane are used to extract desired compounds from marijuana flower.

Let’s look at PHO a little closer (no, not the Vietnamese soup – although that sounds nice, too)...

If we’re anything like Hank Hill, we love our “propane and propane accessories.”

Marijuana extracted through propane as the main solvent during the extraction process is called Propane Hash Oil or PHO for short.

PHO is recognizable by its bright yellow color and is often known as “honey.”

It also tends to have a “buddery” consistency.

PHO is made using only propane as a solvent.

It also removes more of the solvent in the end.

PHO is consumed in a variety of ways: oil rigs, pens, or even joints. 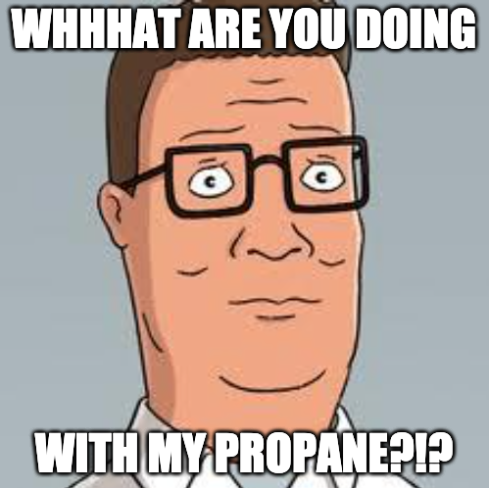 PHO vs. BHO: What is the Difference?

Are you a BHO or PHO kind of person?

One big difference between PHO and BHO (Butane Hash Oil) is consistency.

PHO more often than not will have a buddery consistency (softer) whereas BHO will more likely have a shatter consistency (glasslike, brittle).

Another difference between the two is the boiling point. Propane has a lower boiling point (43.6º F) than butane (32º F) which means little heat is needed to purge the solvent.

This temperature difference affects the consistency of the concentrate and makes it much richer in terpenes.

Propane hash oil is also known for having fewer residual solvents in the concentrate.

This is a HUGE deal.

With concentrates, there is always a risk of a gas leak that could spark and cause an explosion.

PHO extraction tends to be a safer means for companies to operate in a licensed facility. Closed-loop extraction systems ensure propane doesn’t leak.

How To Smoke PHO

Unlike smoking a bowl, you are going to need a specific set of tools. Tools that will make any wax concentrate cower in fear of you.

When using a Nectar Collector, specifically designed trays/dishes are a must.

These kinds of products are made out of glass, quartz, or silicone.

After putting a small dab onto the container, blowtorch the tip of the collector.

While heated, drag the hot nail across the wax while sucking through the mouthpiece.

Deals on Concentrates In Denver

The Lodge has two dispensaries locations in downtown Denver.

Herbs 4 you is located in the Capitol Hill Area.

The Stone has two dispensary locations nearby: Denver and Lakewood.

Current deals for ounces include:

Pure Marijuana dispensaries are located throughout the Denver area.

Chronic Therapy has a location in Wheat Ridge and Cortez.

RiverRock has a location in downtown Denver.

Current deals on pre-rolls are:

10% off order when you max out on your limit!