Posted by CANNASaver on Wednesday, 02 December 2020 in Canna Blog

Often available in an oral syringe, cannabis distillate is a highly potent cannabis product that has more ways to use it than almost any other form of cannabis. In part, this is because the cannabis oil in a distillate syringe is already activated and ready to produce an effect - medical or psychotropic. The other? Imagination is the limit.

The distillate syringe allows medical marijuana patients and recreational consumers to easily measure the dose of THC or CBD they are consuming while also keeping the sticky oil contained in an easy-to-dispense package.

Unlike many other cannabis concentrates which form into wax and butter textures or shatter like glass, marijuana distillate is more runny and sticky. This renders the jars and packages that cannabis wax or shatter come packed in less viable. Putting distillate in a syringe allows cannabis consumers to push the viscous resin out without fear of dropping the entirety of it on the carpet or on a work shirt - and this is just a small benefit of the peculiar packaging. 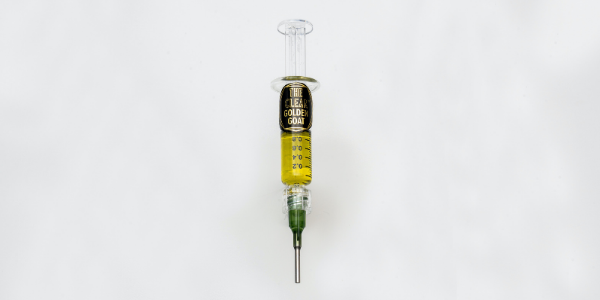 All About Cannabis Distillate

There are more types of cannabis concentrate than there are fingers on a human. You read that right – there are more than 10 varieties of weed concentrate, and more seem to show up each year. Each type of extract is produced using its own style and is often named for the finished texture or the method it is produced.

Cannabis distillate falls into the bucket of being named for its production method, which is distillation.

Distillation is a widely-used technique and has been for hundreds if not thousands of years. Distillation is used to clarify, separate, or refine various products, foods, and drinks, often using heat and oxygen. The water we drink can be distilled, as is the gasoline that fills a car and the alcohol that you, I, or the Romans drank. Distillation is largely associated with the science of chemistry - where scientists use the process to separate substances for the purpose of refining, concentrating, mixing, or creating a specific chemical or substance.

How is Cannabis Distillate Made?

Marijuana producers refine cannabis into distillate by starting with a Co2 or hydrocarbon (butane, propane, etc…) cannabis oil extraction, which contains many of the cannabinoids, terpenes, and flavonoids found in the plant.

Once the raw flower has been concentrated, distillation uses temperature and molecular weight to separate the molecules that give cannabis its flavors and effects from one another. This process uses the boiling points of the various natural compounds found in the cannabis plant to accurately pull one from the other. This leaves THC separate from CBD, separate from CBN, separate from CBG, and across all terpenes and flavonoids. It also makes for a nearly odorless, mostly flavorless (but sticky) product. And it’s because of this molecular distillation that cannabis distillate is 90+ percent THC on average. Since the cannabinoids like THC have higher melting points than the terpenes, the terpenes must first get separated to produce cannabis distillate. This makes it really easy for producers to reintroduce terpenes and flavors and dial them to create complementing flavor and effect combos.

But enough about how awesome distillate is – let’s get into the best ways to use distillate syringes. 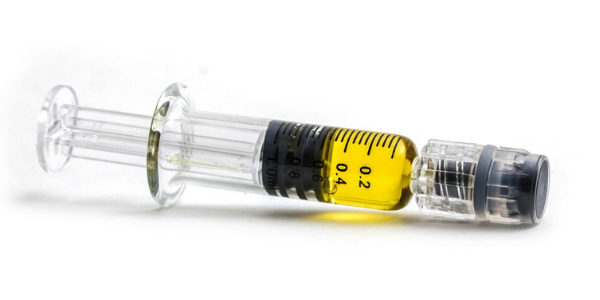 Using a distillate syringe can add to the potency of your favorite flower. Top your bowls or infuse your joints with the sticky oil. Cannabis distillate is often sold with terpenes reintroduced so that us consumers can have some excellent flavor and an excellent experience. By mixing your favorite cannabis strain with distillate, you have infinite opportunities to explore more potent flavor and effect combinations. The syringe allows you to easily coat the joint paper or dispense a dollop atop a bong bowl. 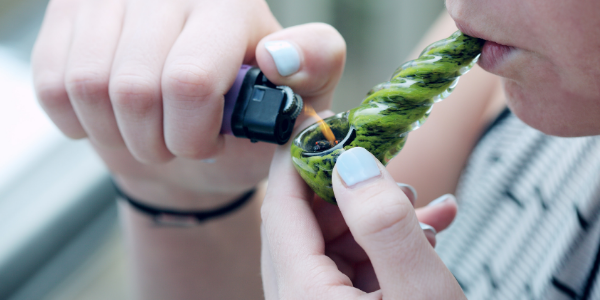 Dabbing is a bit different than smoking. In principle, both require heat and for the consumer to inhale. The difference is dabbing is not burning, but vaporizing the cannabis. Distillate syringes are ideal for dabbing because you can easily dispense a dollop on your dab tool.

Distillate syringes are made to make it easier to dispense the resinous cannabis extract. The distillate, itself, is made to be consumable. It is activated and able to produce an effect out of the package. It should come as no surprise that this makes it an absolute winner when it comes to making edibles or adding cannabis to foods and beverages. With traditional concentrates, you’d have to decarboxylate the extract before it could pass into the brain. And while THC-a has some appreciable medicinal effects, it is THC that produces the lionshare of effects which cannabis is known to produce. Distillate syringes make it easy to add to anything.

Eating Distillate from the Syringe

Initially setup to enable medical patients to be able to treat symptoms without having to smoke or inhale anything, distillate syringes allow the activated oil to be placed under the tongue, on the gums, or to be swallowed. 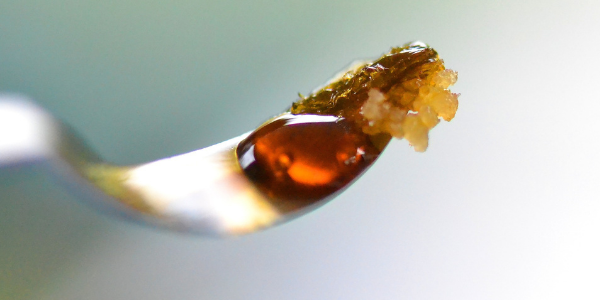 How Much Are Edibles
Save Money as a Stoner