Posted by CANNASaver on Thursday, 04 November 2021 in Dispatches from the Highlands

BREAKING - A giant 34-foot statue has been erected in the community of Fezziwig, Authorities report, but no one knows how it got there. The monstrosity, sculpted from what appears to be Cheez Whiz, is in the shape of an anatomically-obtuse giant boar. The monument was not announced to or by city officials, who say that the mere size of the pedestal alone suggests a construction crew worked through the night. Yet nobody knows who paid for a crew of such magnitude, or who coordinated what appears to have required nearly 200 volunteers to lay the final layers of Whiz straight from cans, assuming they were, at minimum, shaping the detailed contours of the hog’s bristled hair with plastic knives and sharp sticks. 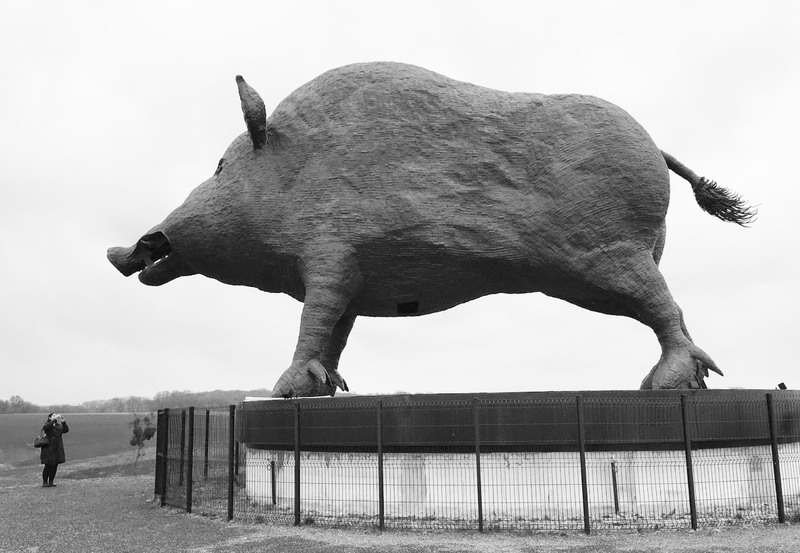 “When we woke up this morning, there was the statue, greeting the citizens for the morning commute,” said city manager Brenda Hawthorne. “But when it comes right down to it, nobody really filed any paperwork to build a statue there, much less 30 feet tall and made of a foul, synthetic cheesy goo.” Yet, it wasn’t so much the strange effigy near the townsquare, as the celebration that followed, that was, in all other ways, completely unexplainable.

Almost immediately at dawn, a crowd gathered around the statue. In addition to novelty photographers, other vendor booths quickly sprung up to hock tshirts and other boar and Cheez Whiz keepsakes, to accommodate the almost immediate stream of sudden tourists descending upon the scene. By 9 a.m., an extensive tent city sprawled for blocks and press vans came pouring in from other suburbs.

Authorities say they were further perplexed by the somewhat spontaneous parade that ensued at 9:30, complete with at least three marching bands, a few floats, official Grand Master and fire truck. “We’re not sure where the bands came from and it wasn’t even one of our city fire trucks” said Hawthorne, adding, “the whole thing took us entirely off-guard.”

Residents reacted with surprise, some pleasantly, some, not so much. While dozens spontaneously showed up dressed in full boar costumes and cheered, at least one subset of the crowd--portly men with boxes of crackers--were not happy. "It’s spoiled Whiz, we can't even eat it," one lamented.

Although no group has claimed responsibility for the monstrosity, Hawthorne believes investigators will be hot on the trail soon. “We’re assuming it’s some kind of local frat, even maybe a cult that worships Cheez Whiz,” she said. “Or at the very least, someone with steady access to dump trucks of the stuff. Seems like that might be an important clue.”

According to local historian John Kaiser, an organized group is likely not to blame, other than a random few, energetic and blazed cityfolk. "It’s probably just a couple of people who got ripped on a Saturday and stormed the town center to erect a huge statue from ten metric tons of sprayable-cheddar. It's happened before, long before our time, but this is history repeating itself.”

“The question is, what to do with that much lukewarm cheese gravy,” he added, “before the next sunny day covers the whole hill in nacho sludge?”